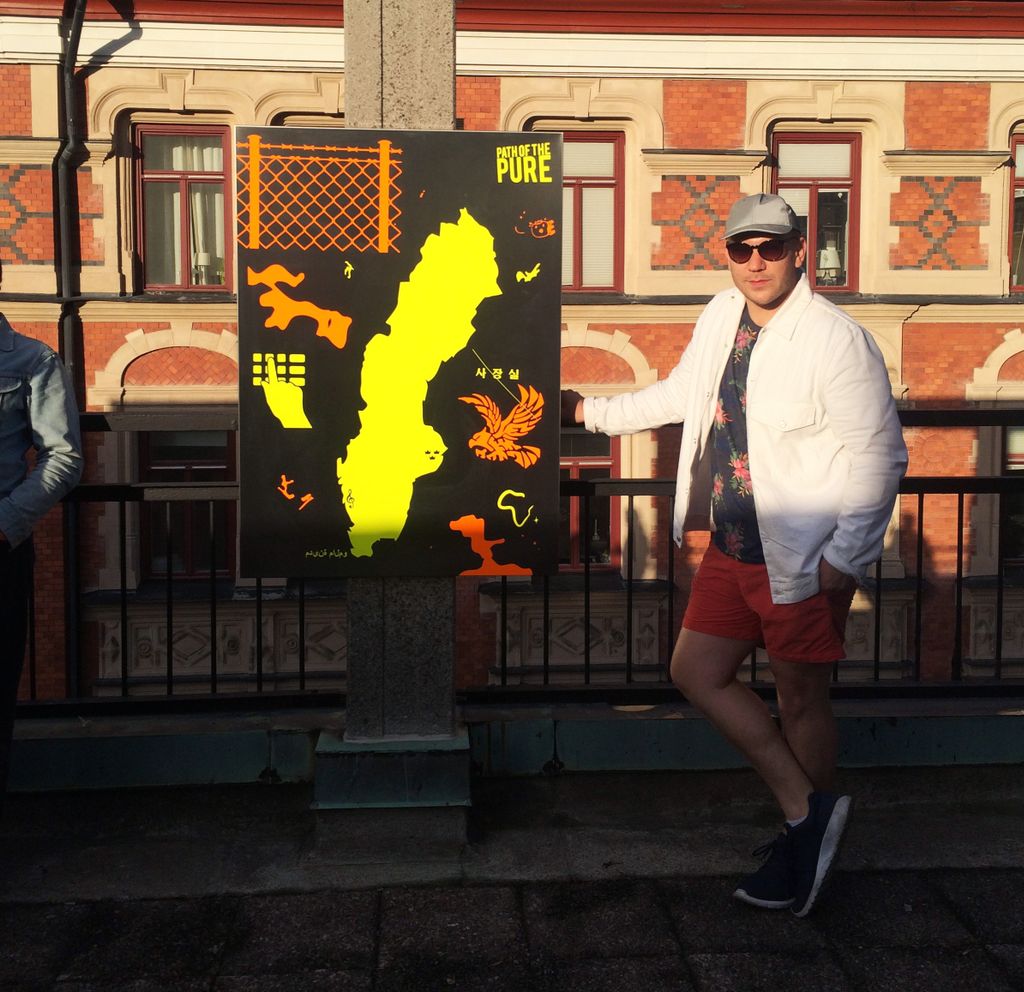 THE QUEEN OF NIGERIA

Having a 'oh, we met online' story is just as romantic as meeting IRL, right? Or? At least this is how Artworks met the artist who calls himself Nigerian__Queen on the Internet.

Behind the obscure Instagram profile unveils Ilja Karilampi - a Swedish contemporary artist and Muay Thai practitioner, who uses multimedia and pop-culture to echo his artistic expression. Despite only being in his mid 30s, he’s exhibited in London, Berlin, Amsterdam, Milan and New York. He counts Gothenburg, Berlin and Stockholm as places he has lived in.

After a busy summer mixing pleasure and business we sat down for a chat to figure out what hides behind that artist name.

Ilja Karilampi, just the name deserves the Nobel art prize, tell us about it, as it doesn’t come to us as the typical Gothenburg’ish name.

So Ilja, besides having a star-quality name you are probably the most famous shorts-wearer in the art world. Do you have a favorite pair?

Hahaha! Yeah, my watermelon motif shorts. I also like wearing my orange shorts. Not to forget (laughs), when visiting Nynäshamn this summer, I sensed that my pair of green leopard-printed shorts went down well with the local crowd judging by the amount of rolling eyeballs that day.

I’m actually a bit upset that the shorts-season is over, I’ll have to stock up for next summer.

Apart from wearing shorts, we dare say that you have a very unique style. Is there a connection between your art and the clothes you wear (your personal style)?

Thanks, I really appreciate you saying that. There have been work and collaborations where I’ve ended up creating windbreakers, hats, or longsleeves, as aspects for my work. So I definitely feel what we wear, what colours and motifs, is an extension of who we are. 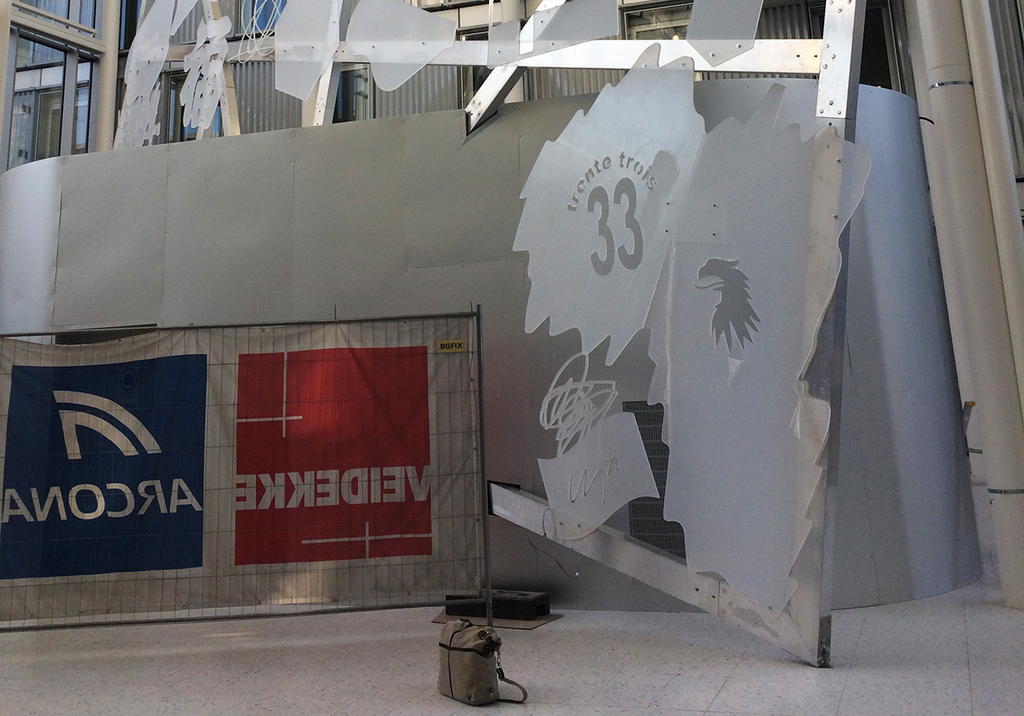 Ilja at the Royal Institute of Technology in Stockholm

You are also a DJ, right?

It's been something I’ve done irregularly for many years now. There are countless of parties I played and promoted around the world.

But when I moved back to Stockholm a year ago, I finished my two-year Friday residency at Berlin Community Radio. So since, I’ve done it even less regularly.

When going clubbing these days I work on staying sober, and treat it more as a living room. Late night memories and moments stay on though, it's been so rewarding and fun.

Why is art not as much part of our DNA as music?

It is?! But rhythm follow our heartbeat so it's hard to sit still. Visual pleasure is always there, maybe just not for everyone in refined forms of contemporary art.

Apart from fashion and music, where do you look for inspiration?

I follow a lot of crime journalism, noir literature. I also read tons of history and especially rockstar biographies. I observe online characters such as the musician Juice Jackal, Russian rich teenagers, genre-bending rappers, and veteran Swedish criminals being interviewed.

I like the pretty surface with a dense background story. Thai boxing gives me a lot of energy and a real break from the world.

You used to live in Berlin? What’s the biggest difference between the art scene in Berlin and Stockholm? What can Stockholm (Sweden) learn from the Berliners?

I lived in Berlin for a few years after having spent some time in Frankfurt. I was so deep into Germany that I got a bit bored and moved back to Sweden. This is more than a year ago, and I have not been back since.

Berlin is great but has become a bit homogeneous, whilst here in Stockholm there is a greater plethora of people at events etc. Maybe I've already become biased…

Speaking of Berlin and clubbing, you once told Interview Mag that you would have loved to run your Stockholm place as a nightclub and artistic venue every weekend, like an illegal members club. Do you still have plans to realise that vision?

One day in one form or another, I’ll tell you that... As a coverup, we could also be serving food, like fried plantains or so. I used to work at Angry Chicken, a small Korean fast food place in Berlin, which turned into the Soju Bar nightclub after the shift was over. Those kinds of purpose-twisted businesses interests me. Such as the only entry to the nightclub is through the backdoor of a night mini mart, as in the President Room I did for Absolut two years ago.

Are the lines between art and fashion blurring more and more, or is the fashion world just riding on art’s coat tails?

I talked to my friend Nhu Duong about this recently. Art and fashion are both their own systems, one more functional than the other. I do know there’s someone somewhere within the H&M design department I really bond with; the motives, the designs, cry out to me, I keep buying your stuff.

Everything is blurring; record covers turn into video flyers, that turns into a sweaters, which turns into a massive laser cut piece. Check out the work of the producer Faze Miyake for example. As long as the credit is correct, it’s cool with me.

The online sphere and technology advancements have radically transformed business models and everyday life upside-down, art included. This is the theme of the Kiasma show that you are currently part of, tell us about how it has influenced and changed your work process?

I can’t say it’s any different than any other technology break-throughs. I follow whatever makes it easier to materialise an idea or concept, you just gotta roll with it.

But I guess it’s also about the future, and that's important to me. To make something new that matters. The Kiasma show ARS17 was particularly solid because they gave me carte blanche to create the installation "Capital City" and its been up all summer, 24/7, facing the parliament. 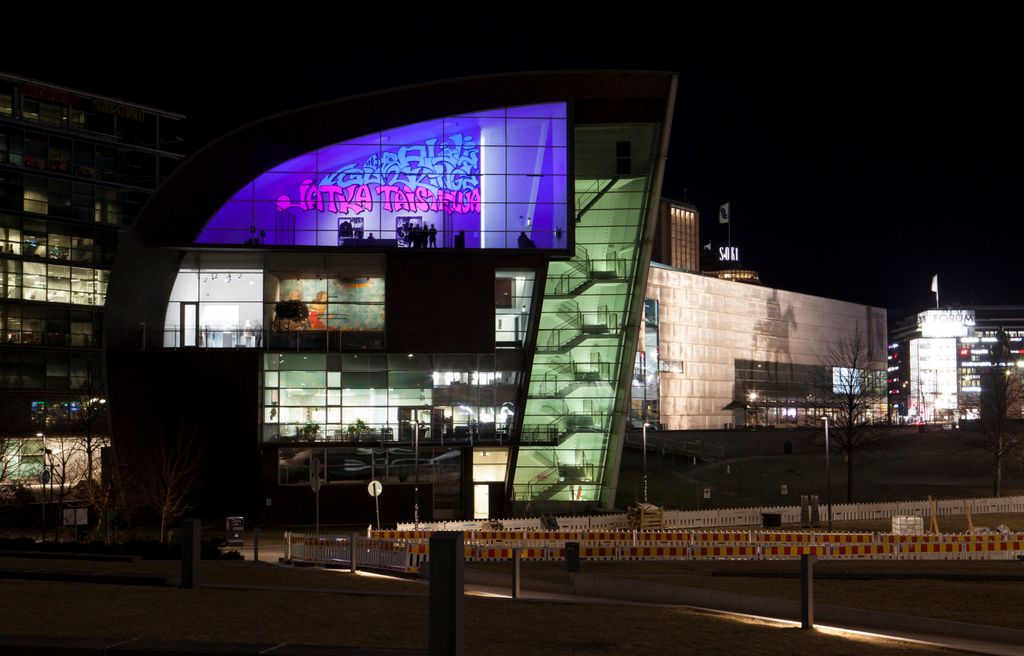 And your personal life, how are you living your life online and how do you get your daily dose of culture these days?

It’s a bit addictive being online, everything is within a finger’s reach. Obviously one creates a bit of a protective facade to glam up everyday life. As a viewer we only get to see the filtered best selected bits and click-baits. I should honestly be taking more breaks from watching Instagram stories before going to sleep.

Also a lot of people I haven't met like the 612 gang from Oslo, and the_cable_guy_,  the guitarist in Blood Orange.

Surely, I’ve got new fans and friends but I don’t really comment sales. What I like the most about Instagram is the ability to distribute images instantly all over. It’s totally changing the way we live with pictures.

I’ve been approached by government people and organisations through social media.

When you go back to Gothenburg what places do you always end up going back to?

Björkekärr and Studiegången in east Gothenburg. I grew up there. It’s an apartment area on a hill close to the lake. I usually end up chatting with the neighbours and play frisbeegolf with my brother Sascha.

My first place when moving away from home was in Landala, so Studiegången is a bit far away from places I feel more connected to as an adult, like Järntorget, Vasastan, Majorna, etc. And the whole harbour with the fish shops.

So where are you heading next, what’s happening this autumn?

I'm part of an exhibition called Folkmusik 2.0. It opens at Kulturhuset Stadsteatern on 20 October. This is a show that revolves around rap music in a more cultural and aesthetic sense.

I also have some of my works in the bar at Pelikan on Blekingegatan until the end of October. Then I have two public art commissions that I am working on right now.

Other than that I’m going to Thailand for 12 days with my Thai boxing club Slagskeppet this autumn to train and get some new influx.

Ahhh I forgot… "Westafrican Roadmovie", a collaboration with Agassi F Bangura from last year that we are about to premiere. I really want to build this installation at gallery Erik Nordenhake this winter. We have pre-scheduled date for 26 November, with a pressrelease written by the Swiss curator Mateo Chacon-Pino.

Until then, catch me in the orange jacket! 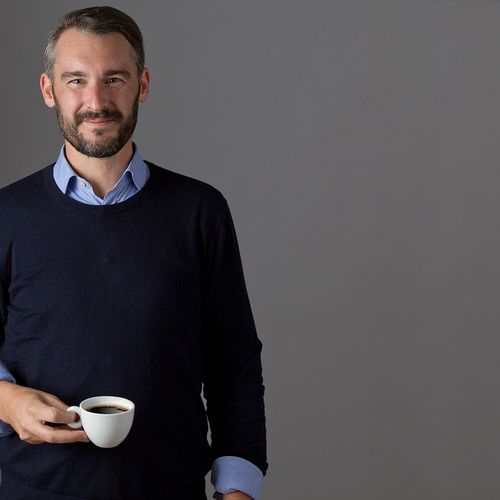 A moment with Måns Jacobsson Hosk

We begin our series highlighting the personal and professional journeys of some of the most dynamic entrepreneurs. Måns Jacobsson Hosk, CEO and co-founder of Kurppa Hosk, tells us what makes an art gallery attractive.
2 min read 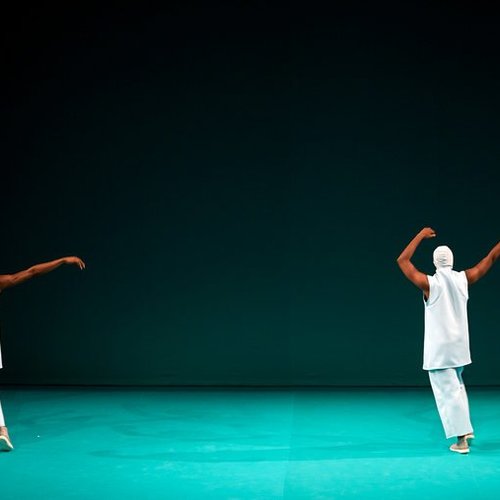 Culture is more than entertainment

A moment with Måns Jacobsson Hosk

We begin our series highlighting the personal and professional journeys of some of the most dynamic entrepreneurs. Måns Jacobsson Hosk, CEO and co-founder of Kurppa Hosk, tells us what makes an art gallery attractive.
2 min read

Culture is more than entertainment