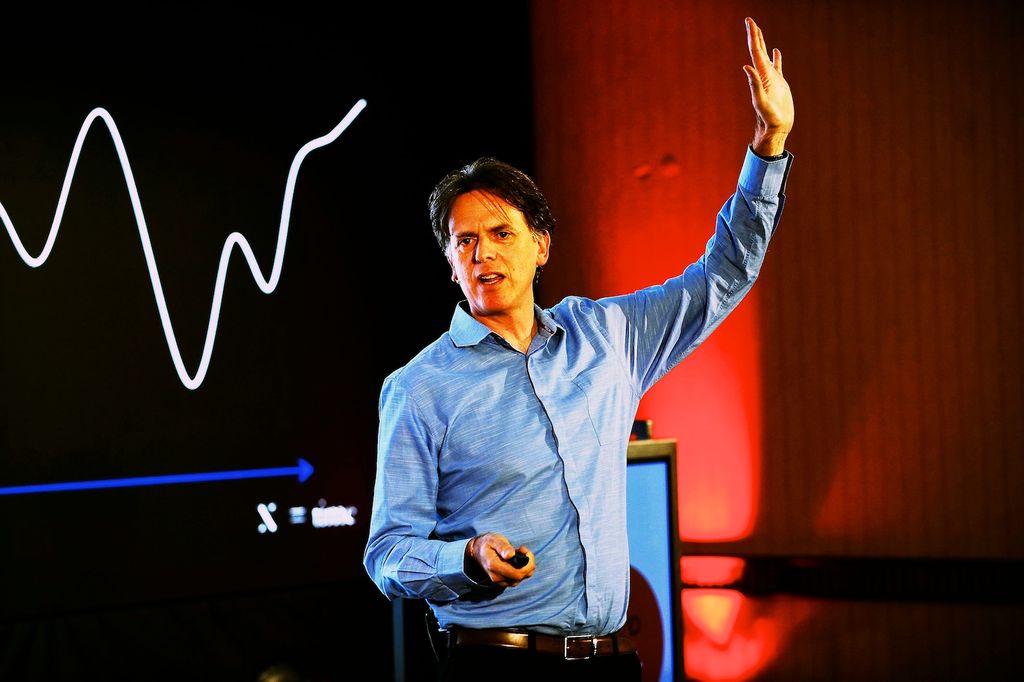 UNCERTAINTY IS THE NEW CERTAINTY

In this climate of incessant change business is more and more ‘made up’ and improvised reveals David Pearl, author of Will there be donuts?

“All figures are either looked up or made up – and those that are looked up are made up”.

It isn’t the kind of thing you might expect to hear in a boardroom, but that’s exactly what one of my clients, a highly professional financial officer, said to her CEO a few months ago. Sure, there’s a jokey, disingenuous side to the statement. And it got a laugh. But there’s also a deeper truth to what she was saying. We’re living in a world where, as the thinker and activist Jim Garrison likes say ‘things are getting better and better and worse and worse faster and faster’. The truths and certainties of even a few years ago are now in flux. Businesses and those that lead them are feeling this in particular.

For me that means my day job of inspiring organisations to be more creative and my evening one of leading my improvising opera company, Impropera, are getting more and more alike.

When I started working with businesses nearly 20 years ago, it was a little different. People were still making a clear distinction between hard fact and soft stuff. When I was first called into a large company it was because I was an ‘artsy type’ and they wanted to talk about how the arts might help them solve problems and connect to each other ‘in ways we wouldn’t have dreamed possible’.

Then, the arts were seen as interesting but peripheral. When you said the phrase ‘arts in business ‘ people thought you meant paintings on the wall of an office building. Arts based work was restricted to presentation skills work, role-playing and the dreaded ‘fun’ slot of events and conferences. I always shudder when someone introduces me or my team with the words “and now the fun bit…”

Firstly, it implies that all the other elements of the day – the work bit – is not fun. I think that’s a very limited view of work. And secondly, people have learned to fear the ‘fun’ word thanks to past workshops and “team-buildings” which were anything but. Arts in business became a bit of a fad in the mid 90s and organisations were awash with artists trying to teach business people to be more like them.

Today, the situation is very different. Instead of working on the periphery, arts-based professionals are working in the board room of major companies, helping leaders grapple with creative issues that are now absolutely centre stage for them. I’ve just spent three whole days with 125 of a bank’s most senior executives helping them craft their narrative. Another client wants to achieve a seemingly impossible goal. They have a strategy all worked out but in parallel I am working with them, using techniques derived from my experiences in the film world, to ‘author their future’. And daily I am helping people and the organizations they work for become more and more improvisational.

It sometimes puzzles me when people seem so impressed by improvisation – given everything we do everyday is actually improvised. You don’t need a script to talk to someone on the tube or chat with a colleague, so why does improvising seem so magical? There are four reasons why businesses, once so addicted to hard nosed realism, are now falling in love with improvisation.

So today the hard and soft dimensions are intermingling. I like say my work is the hard-soft stuff; it’s on the invisible and sensed end of the spectrum but with rock hard implications for any enterprise.

Having spent two decades working simultaneously in the adjacent worlds of business and the arts, I’ve noticed how much more alike they are becoming. Businesses are striving to be more creative while arts organizations are becoming more business-like and commercially savvy. They are growing closer because they are not as different as people think. As the revolutionary theatre-maker Augusto Boal once said, “While some people make theatre, we are all theatre”.

Creativity is a profession for some of us but it’s a birthright for all of us.