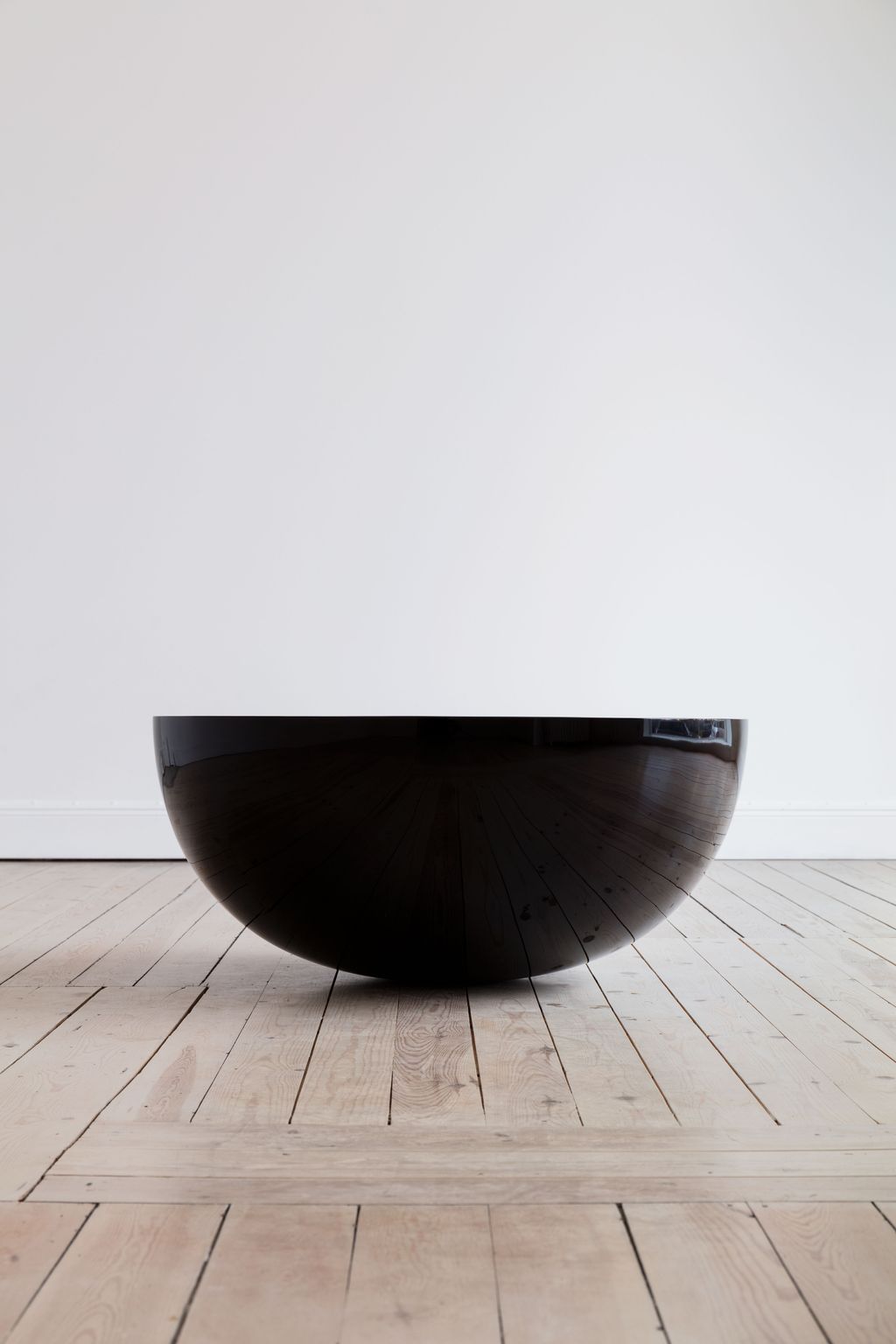 Bowl, 2016Urushi lacquer, hemp and stone powder91.4 × 40.6 × 91.4 cm / 36 × 16 × 36 inStephen Lichty has created a perfect example of a traditional Japanese lacquerware bowl, with the exception of its unusually large size. When placed on the floor, the bowl reaches just below the knee and is twice as broad across the mouth. The size might read as exaggerated and comical, theatrical even, but it doesn’t. The bowl is a beautiful object created through excessive care. It arrives whole without explanation. It carries the impression of its labored history like a secret and it wears its identity with dignity. It is what it is: a large bowl. And its descriptive title reinforces this. It is called simply Bowl.An accomplished Japanese urushi artist was necessary to make Bowl in the traditional manner from many layers of natural urushi, in this case without any additional tinting. As with oil painting, pigment suspended in transparent layers allows for depth and subtlety in color. The piece is a rich black-brown that is highly sensitive to altering light conditions. Careful observation reveals red along the edge where the thin lip slopes to meet the profile. This delicate lip is no thicker than the handle of a tablespoon. Like solar flares on the sun, streaks of gold appear when focused light is applied very near the bowl's surface. But at its thicker base where Bowl sits on the floor, the color shifts to blue-black.The form is smooth and glossy all over. The shape is sensual and asks to be touched, but something solemn and ceremonious in its bearing restrains this urge. The bowl's highly polished surface reflects the world around it dimly; the image curls around the exterior surface of the bowl. A pool of light fills the negative space within and the world is reflected warped and upside down in the basin. The illusion is clear and vivid in bright light, causing the bottom of the bowl to appear convex. On approach to the object, one easily becomes lost gazing into the bowl’s mouth where surface and illusion play. The observer is quickly and quietly absorbed.A soft cloth encloses Bowl during storage and travel. The wrapped vessel rests in a wooden box just like any other fine Japanese lacquerware bowl, complete with the customary flat braided ribbon. The box is called a tomobako and was produced with the same attention to detail as the bowl itself. It is blond, lightweight and joined with wooden nails. The lid’s receding tiered handles belong in a particular orientation to the base and the purple ribbon that holds the lid in place slips through narrow openings at the foot of the box. This foot both secures the ribbon in the center and keeps the floor of the box suspended above the ground. The ribbon is tied in the conventional Japanese way producing a flat symmetrical bow. Such meticulous attention to tradition and detail is echoed in the piece itself, though this particular manifestation of care remains concealed during exhibition. It is the appropriate preservation treatment common to collectable Japanese lacquerware and pottery.In his 1933 essay “In Praise of Shadows,” Junichiro Tanizaki suggests that darkness brings out the beauty in traditional Japanese lacquer work, indeed he believes that darkness is inseparable from Japanese aesthetics. Throughout its presentation at Erik Nordenhake, Bowl will be displayed exclusively in natural light. The limited daylight hours of the Nordic winter make this condition peculiar for a gallery show, yet Tanizaki would consider it suitable for viewing a piece like this. Presumably, Bowl will be examined in low light for much of the exhibition and its observation will be subject to the sun’s caprice. As the weather changes, what is available to be seen will change too. When the sun sets in the afternoon, the show will close for the day or the piece will sit in the dark. Bowl itself will remain unaltered, a piece of art faithful to its own identity, oblivious to the fluctuations of light evident to exhibition-goers. Within the diurnal cycles of light and dark, light becomes temporal, and the work detaches from whatever artificial illumination may reveal (or obscure). The limits and particularities of our own perception meet in an encounter with the object in itself and the object in the world.Juliet Jacobson, January 2017

This artwork is not part of a current exhibition. If you are interested in this piece, contact us here for more details.