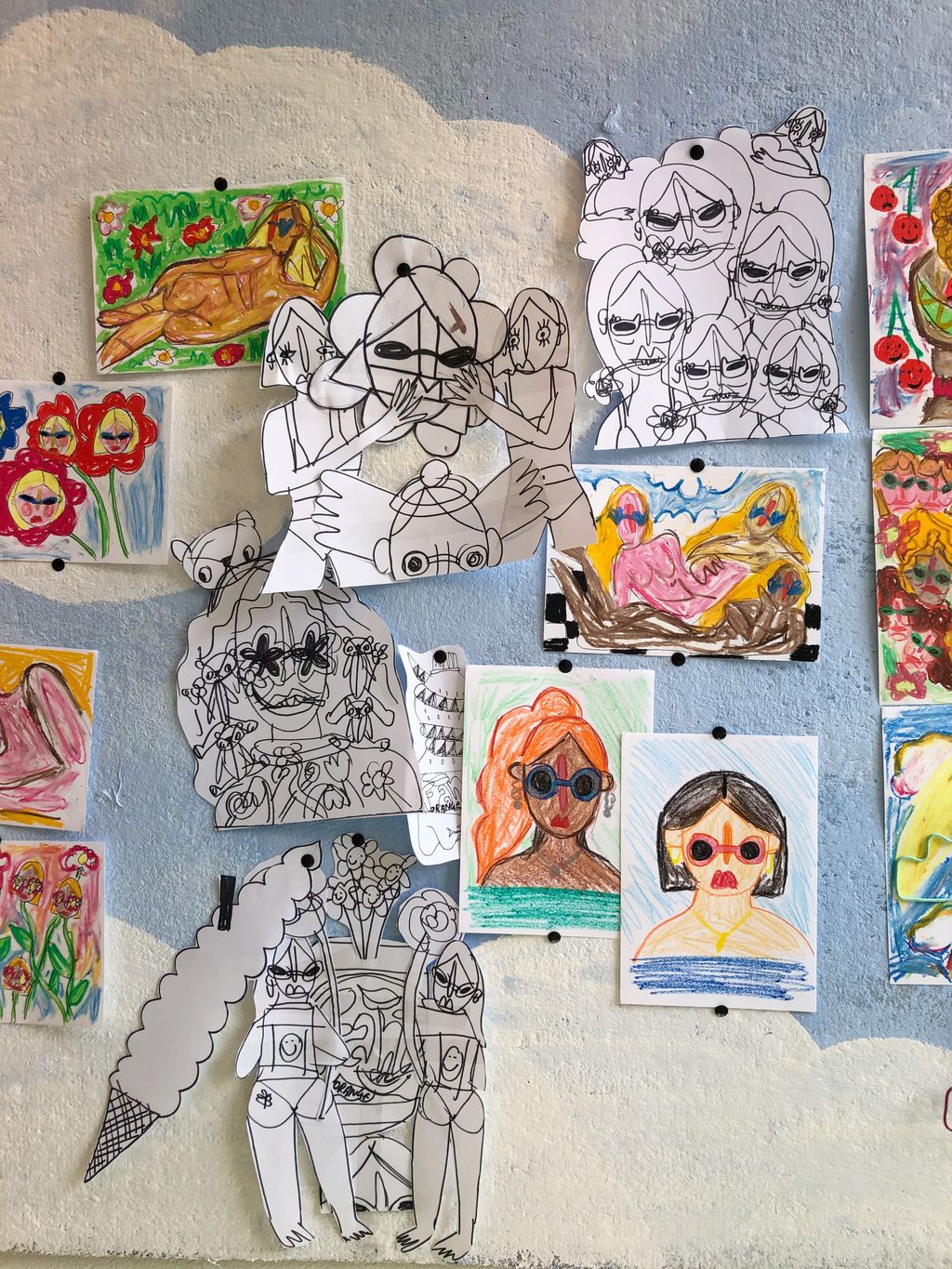 THE CRAFT OF EXPRESSION!

Today's guest of honour is Amy Worrall who's stopped by the office to talk more about her expressive ceramic sculptures and what's planned ahead.

Hi Amy! It's so nice to meet you and have you visit the office. I want to start from the beginning! How long have you been working as an artist?

Did you always know you were going to be an artist?

Yes. Definitely. It’s always been my dream to do something creative although I didn’t think I had the patience for it. 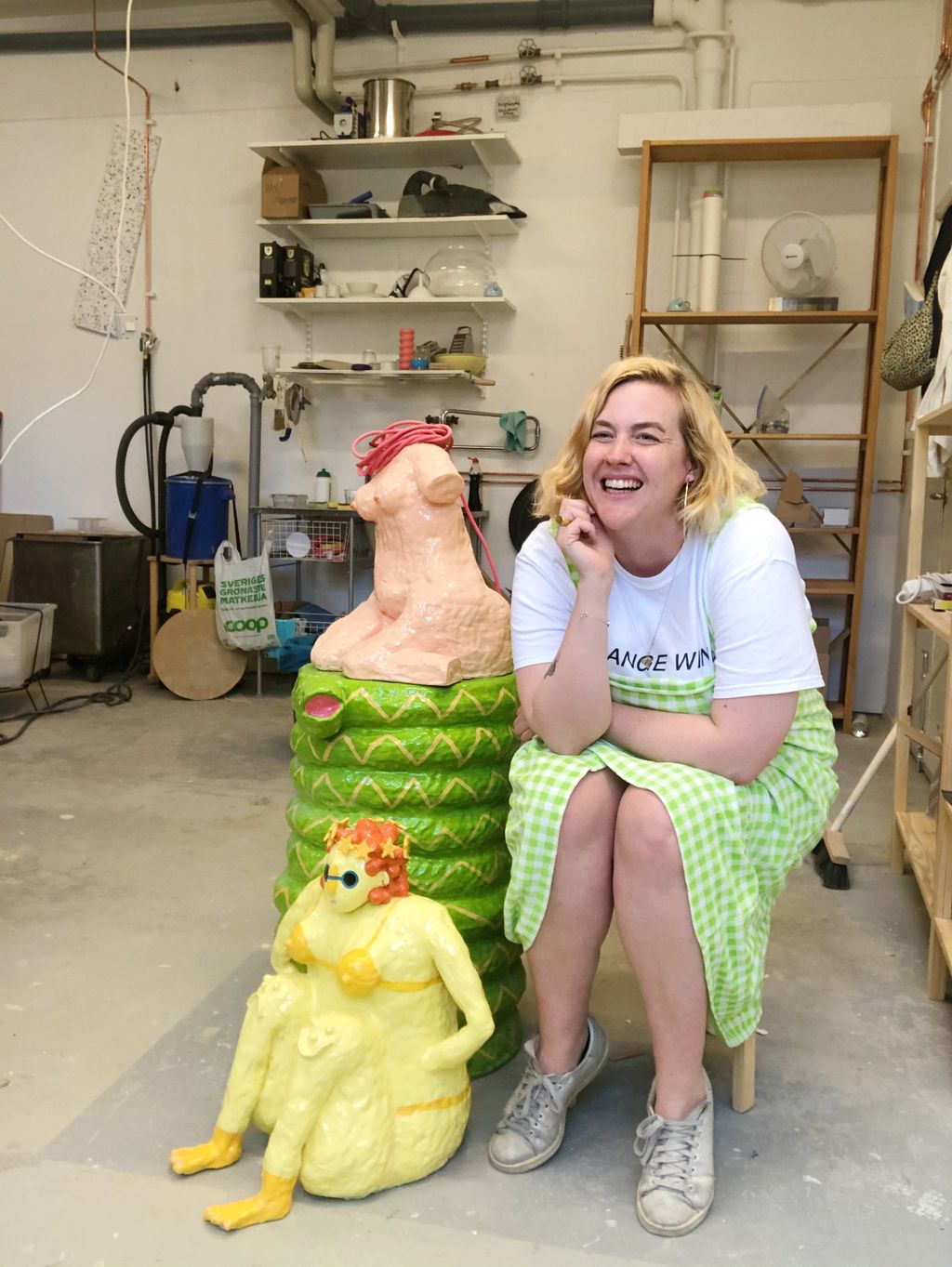 Amy Worrall in the studio with her sculptures.

Well my Bachelor’s was actually in graphic design and illustration but I started to feel bored and uninspired by all the computer 2D-stuff so I started pushing for 3D and applied for a ceramics evening course. I’d always thought I’d try it at some point and then I ended up moving to Stockholm to attend Konstfack where I eventually mastered in it. 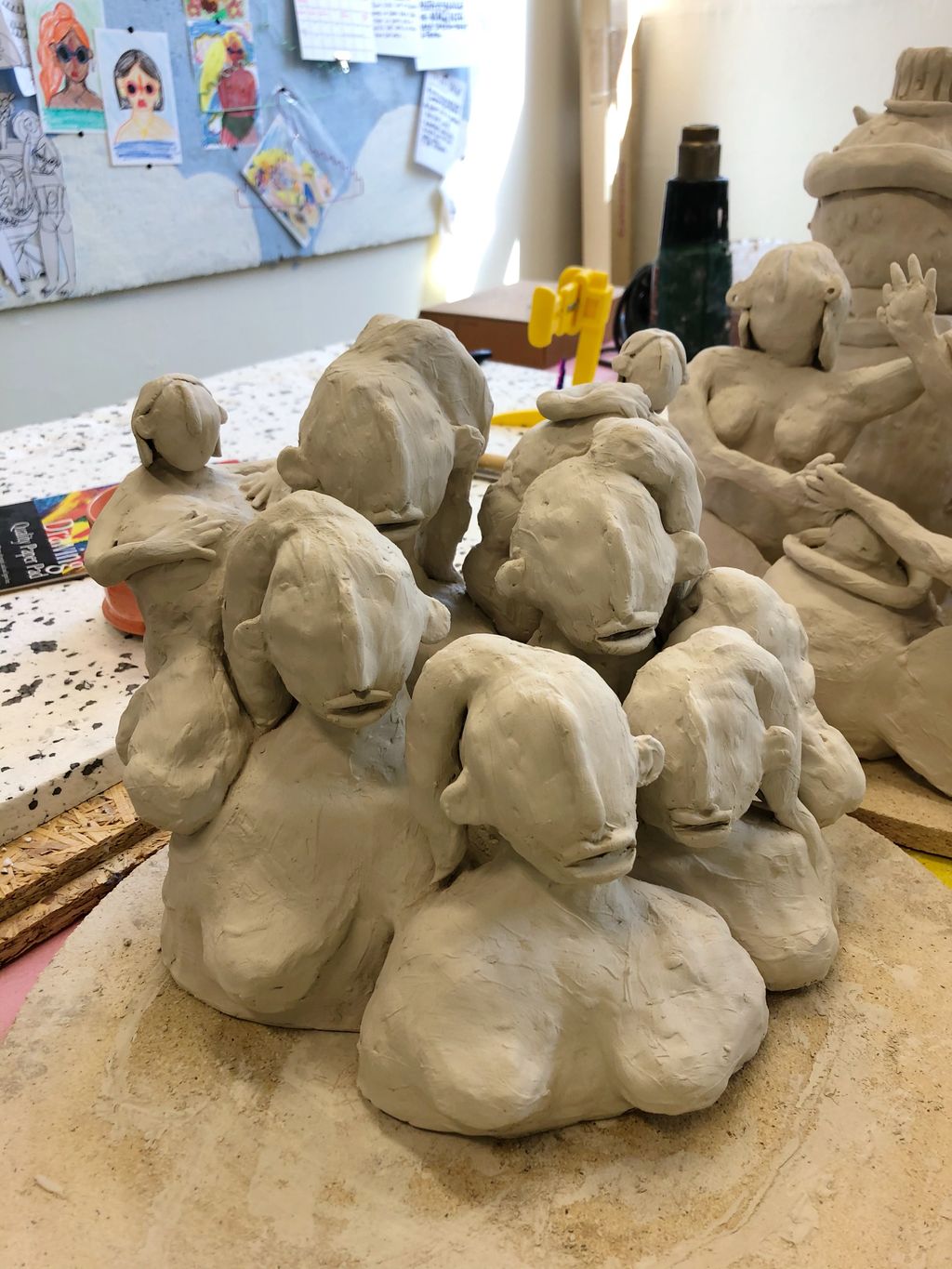 What inspires you to create your sculptures?

That’s a very big question. They’re all vaguely, and loosely, self portraits exploring different facets of my mind. It’s all the information I’m receiving so there are a number of points of inspiration. Disneyland, pop music, Spice Girls, Britney Spears. There’s contemporary culture and what’s happening immediately around me.

My work now has changed a bit since I moved to Sweden. I’ve started exploring different culture shocks and the idea of the male gaze and how it affects me. I’m also exploring beauty standards that we have to live up to; standards and stereotypes that I’m also guilty of perpetuating and upholding. So, it’s full of contradictions! Two messages that can’t fit together but that do. There’s nothing that’s off limits for these women I create. 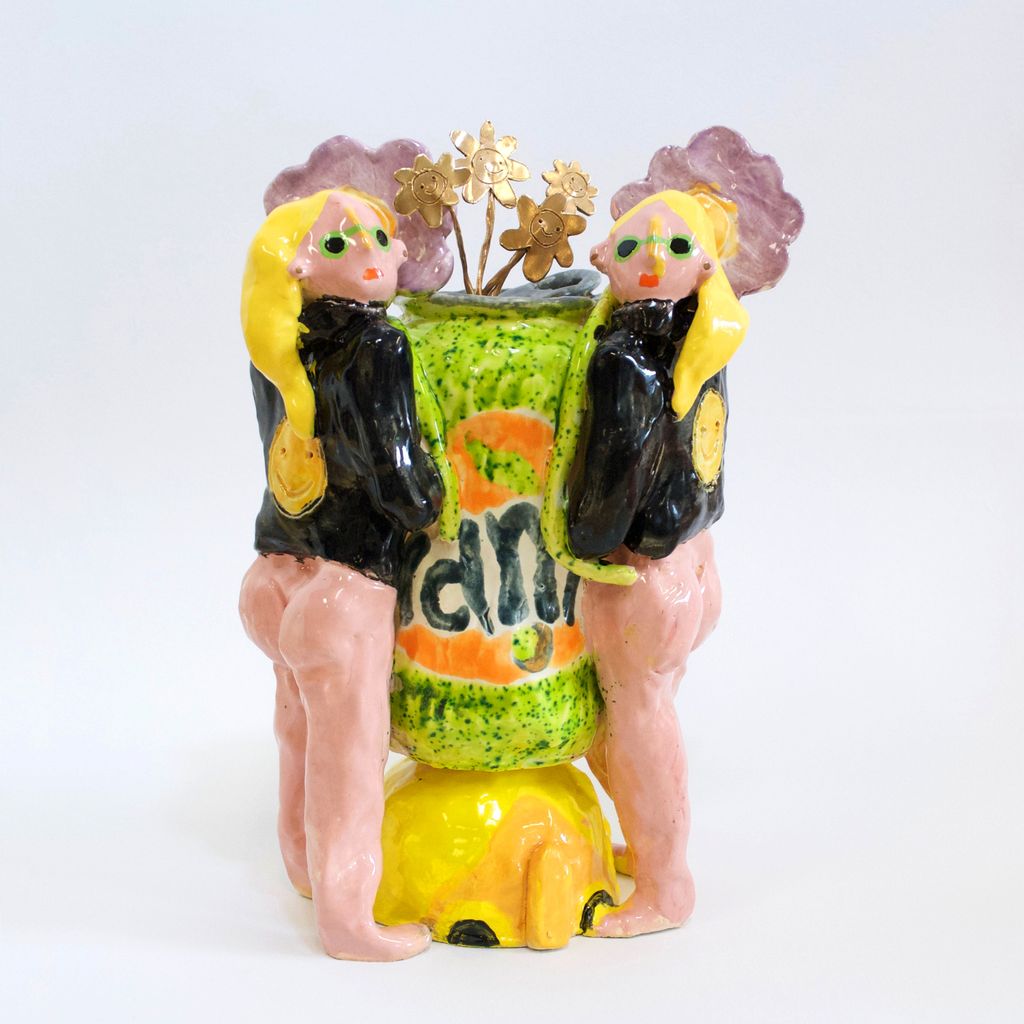 What do you think people feel when they see your sculptures?

I hope people feel happy. That’s the first feeling I want them to feel. Then when they look a bit closer I hope they see all the hidden messages. Like how the skin is kind of lumpy, how voluptuous the shapes are and how their eyes are obscured. There’s this insecurity in them but they’re meant to be bold and confident characters at the same time. I guess I convey what I feel through these sculptures.

What do you think your sculptures would say if they could speak?

Which other artists inspire you?

There’s loads, really. I love Rose Wylie, she’s a painter who also works a lot with popular culture and she speaks a lot about how her paintings come from a slightly disgusted and intrigued standing point of the media, which really speaks to me. To be fascinated by celebrities but also grossed out at the same time. She also speaks beautifully about it and her paintings are fearless. She often leaves mistakes that she paints over that give her works a sense of history of the painting process. I do the same thing; you can see my fingerprints and where things have gone wrong.

When I discovered Marie-Louise Ekman I couldn't believe no one had told me about her before! I love her characters and how she moves through the story. I really want that in my work as well, a defined visual value. 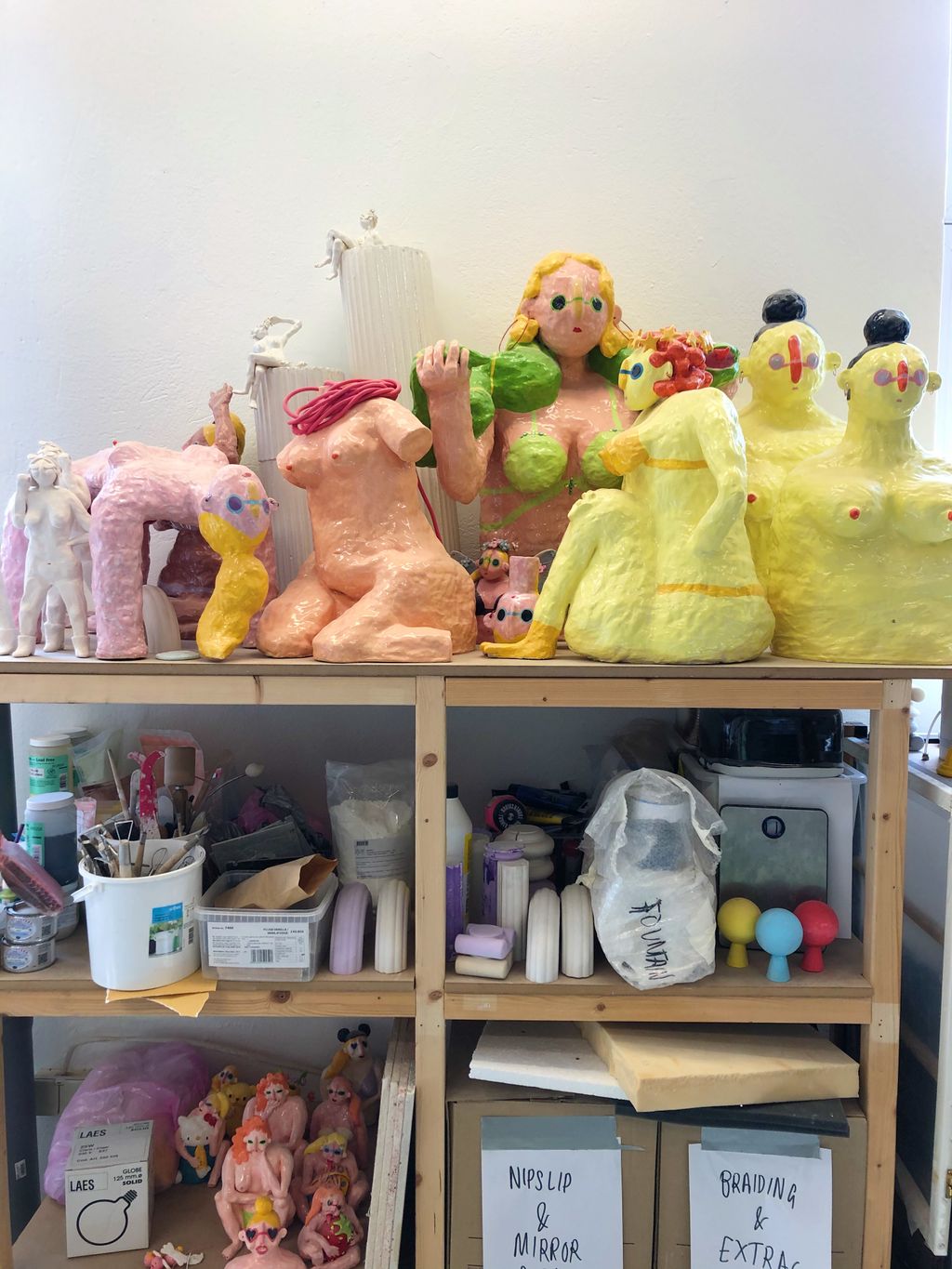 Close up from the studio

Do you see any major differences between the art scenes in Sweden vs England?

Yes, definitely. In terms of the school system it’s much more open and caring here, and it promotes more peer to peer learning. It’s more about sharing than in London where it’s more of a competition. You have to be the best and if you’re not the best then no one cares.

I think the art scene is super accessible in Stockholm as well. It’s more open, you can meet people and do things much more easily. I know Swedish people don’t feel the same, they think it’s more closed off, but coming from London I see a big difference. Since it’s a smaller city it’s easier to make connections and sort of break through. Obviously there’s less going on here though.

If you were one of your sculptures, which sculpture would you be?

At this moment I have to say that I’m the one with a girl hugging a tin of tuna because I’m obsessed with tuna at the moment. 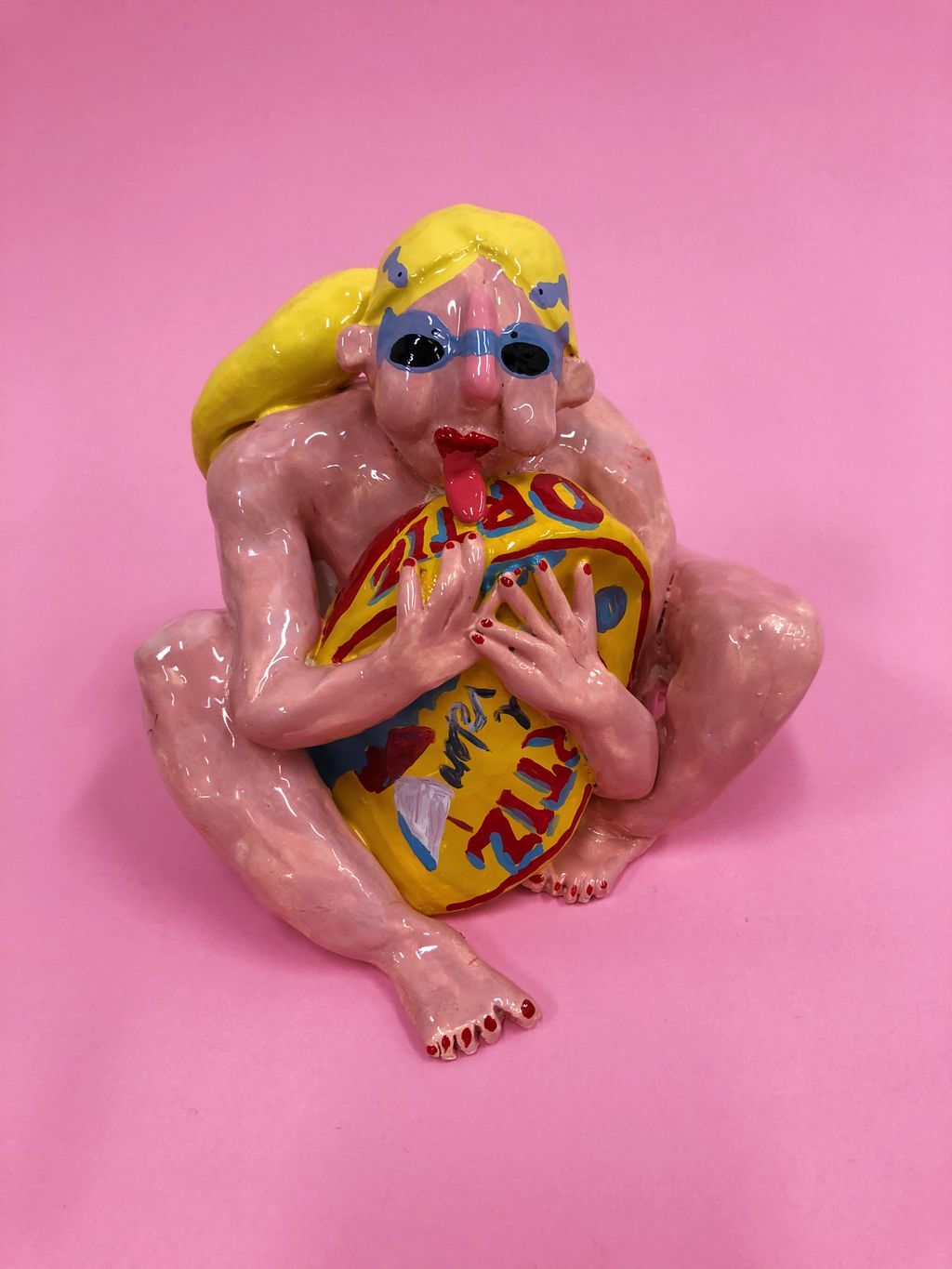 If you were a song, what song would you be?

So easy! It would be Not a Girl Not Yet a Woman by Britney Spears.

What do you have planned ahead?

At the moment I’m gonna be working on six new pieces for an exhibition in December at Cohle Gallery in Paris. They’re all on different topics of being a woman and I’ve been really obsessed with how girls wear their football shirts and how they have to make them sexy. So I’m gonna go down a football path for the exhibition and I’m not sure how that’s gonna land in France, making it about English football and all...

I was in another exhibition this summer where I for the first time started adding different elements to the sculptures such as bronze and stained glass. I really enjoyed that so I’ll continue down that road and hopefully work with textiles as well. 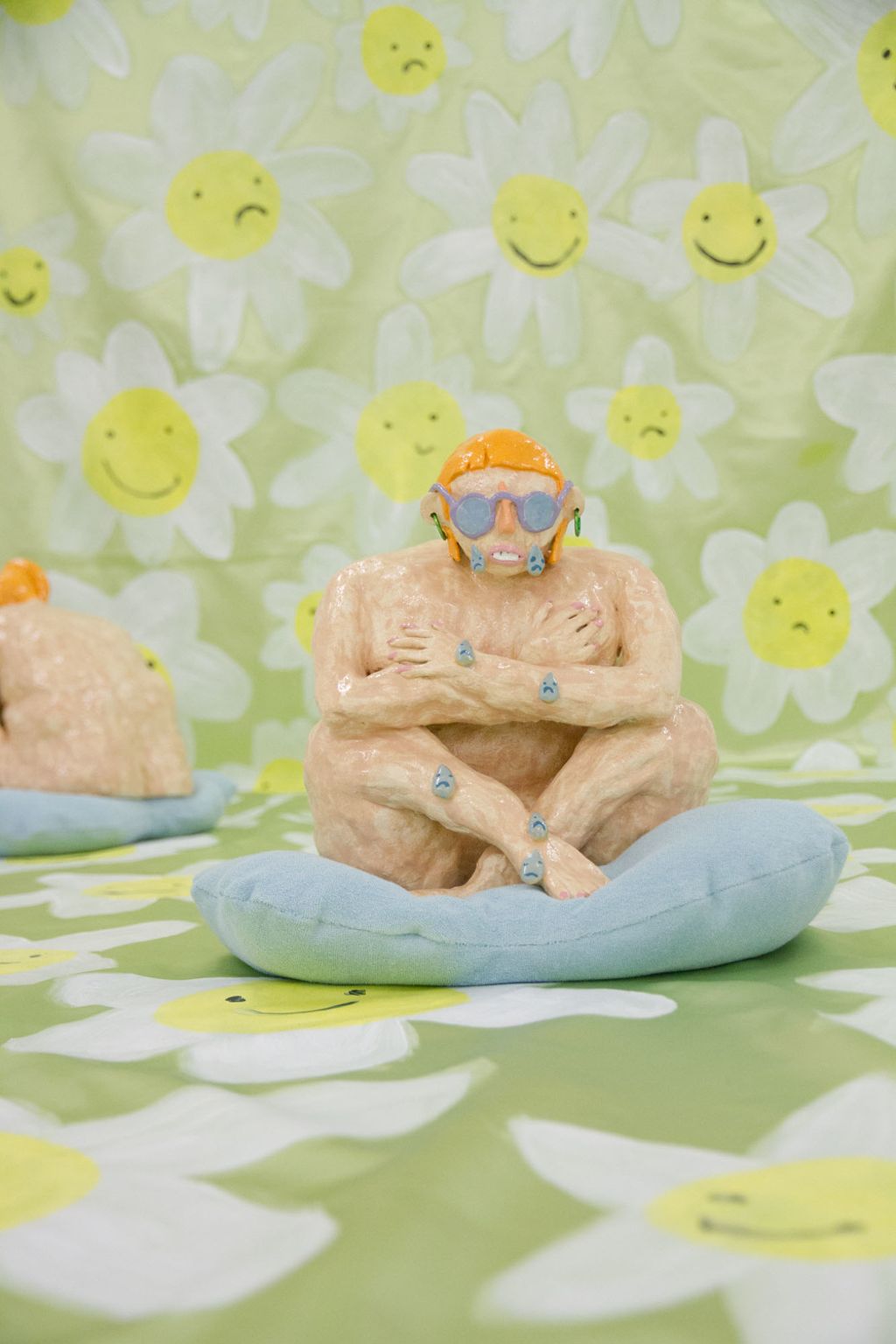 Crying In The Daisies.

What’s the best thing about being an artist?

I think that the best thing is also the worst thing. The freedom of it all, that you are the one in charge and in the control at the same time.

It’s difficult to get self-motivated and stick to normal working time frames. The freedom is definitely the best and when people are interested in my work and I see them connect with it, it’s the most fulfilling feeling.

See more of Amy's sculptures on her Artworks page here!