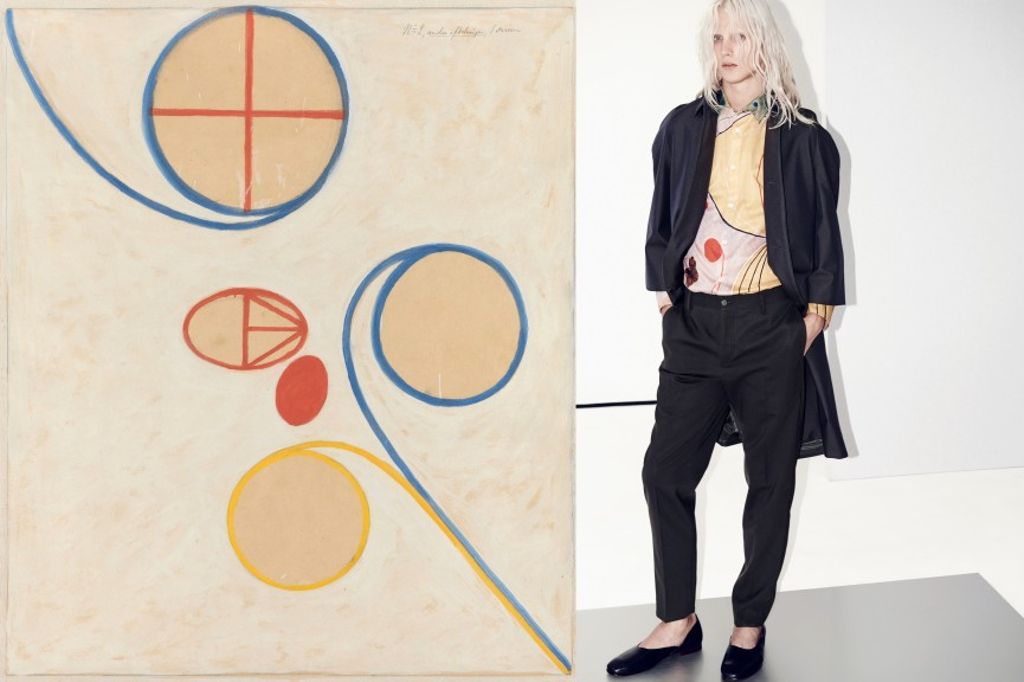 Are the lines between art and fashion blurring more and more, or is the fashion world just riding on art's coat tails? Julie Vidal looks back at their chequered history.

When Swedish abstract artist Hilma af Klint´s works were exhibited last year at major European museums, after 70 years of anonymity, their sensational quality was for example soon absorbed by the fashion industry. Swedish fashion brand Acne Studios launched a mini collection this year, based on the artist’s colourful symbolic motifs that were directly printed on basic shirts and scarves.

Earlier in 2000, a mutual collaboration between British artist Tracey Emin and British punk fashion designer Vivienne Westwood resulted in a Westwood advertisement featuring Emin as a model. Simultaneously, Emin created the self-exposing art piece “I’ve got it all” which photographically depicts the artist herself embracing heaps of money, while sitting on the floor in a provocatively short Westwood dress.

In the 18th Century art and fashion were separated into two different cultural spheres in line with a more general division of arts and crafts in European society. Nevertheless, the border between the two worlds of art and fashion has since then been constantly crossed with different inspirations, interactions, and dialogues.

Throughout the 20th Century surrealist, dadaist and pop artists have worked in the same manner, challenging general conventions of art by introducing everyday objects, including fashion items, into the institutional context of the museum and gallery. Andy Warhol displayed celebrity images of fashion icon Marilyn Monroe in the 1960s, and artist Meret Opppenheim “served” a pair of white pumps on a silver plate in her work “Ma Gouvernante” from 1936. The idea of placing familiar objects into new disturbing contexts was similarly present in surrealist fashion designer Elsa Schiaparelli and artist Salvador Dalí’s creation of a hat looking like a shoe.

In the 1930s the hat shockingly questioned civilised principles of fashion and its aggressively pointing high-heel was, as a phallus symbol, connected to the surrealist interest in unconscious, suppressed sexual instincts. The general application of the surrealist artistic method into the context of everyday life enabled Schiaparelli to bring attention to the ongoing process of identity creations. Her theatrical designs invited women to actively take an ironic distance to their traditional status as objects in society; a matter that rarely was questioned in surrealist art.

So, despite the boundary blurring is it at all possible to speak of a clear difference between art and fashion? From the perspective of art critic Michael Boodro the answer is “yes”. In the magazine ARTnews he has argued that fashion is an industry with a commercial nature, based on the collaboration between the designer, the manufacturer and the consumer. According to Boodro the shallowness of fashion contrasts the much more profound work connected to art, which he characterises as “private, the creation of an individual”. This understanding of art however disregards the numerous collaborative works created by artists such as Emin and Dalí. Boodro’s point of view is rooted in the myth of the genius that has given the art world distinguished, cultural value, which many fashion creators and brands have strived to obtain for a long time.

In 19th Century France, couturier Charles Frederick Worth (1825–1895) for example dressed like Rembrandt, with a beret on his head, in order to give his extravagant creations artistic associations. With the contemporary tribute to Hilma af Klint, Acne Studios likewise seems to strive for an injection of creativity and avant-garde authenticity that is in great demand nowadays, where fashion generally is seen as fast, unoriginal and superficial. As philosopher Lars Fr. H. Svendsen has noticed in his book “Fashion: A Philosophy,” the relationship between fashion and art is asymmetrical because fashion persistently has courted the world of art, whereas the artistic interest in fashion historically has been less tenacious. In other words, parts of the art world have feared that a strong relation to fashion potentially would entail that art permanently lost its higher status in society.

In line with this, Emin and British artists of her generation have been criticised for degrading the field of art through their interactions with presumably “trivial” popular culture. Additionally, the Hilma af Klint collection by Acne Studios has been considered superficial and boring. According to cultural critic Dennis Dahlquist the method of simply copying a painting on a fashion garment is old-fashioned. From his perspective the boundary between high culture and popular culture was dissolved several decades ago when Yves Saint Laurent (1936-2008) in the 1960s reproduced artist Piet Mondrian’s (1872-1944) abstract grid composition on mini-dresses.

Instead, Dahlquist highlights how other recent fashion designers, like Hussein Chalayan, contributed with deep and fresh impulses to contemporary culture, by conceptually and performatively approaching both the creation and the presentation of their designs in a much more refined manner than Acne Studios have. Paying tribute to this experimental fashion, which is more closely related to what is considered art, Dahlquist however contradicts his own presumption that the hierarchy of high and popular culture no longer exists. Just like Emin has succeeded in attracting an audience who might previously have felt excluded by a dominant elitism within the art world, Acne Studios might spread the acquaintance with the imaginative paintings of Hilma af Klint beyond the walls of the museums.

More recent fashion exhibitions at major art galleries have turned out as great attractions. Fashion relates to familiar issues of body and identity and hence invites self-reflection. However, several of these exhibitions have been criticised for being nothing more than mere advertising for the exhibited and sponsoring brands. This critique matches Boodro’s distinction between art and fashion that highlights the essentially different commercial character of fashion. Contrarily, late fashion scholar Richard Martin did not really see any clear difference between art and fashion, since art, according to him, also is highly dependent of a commercial market. From his point of view the good thing about fashion is that it’s trading is undisguised while art to a much higher degree hides its commercial nature behind a spotlight on spirituality. 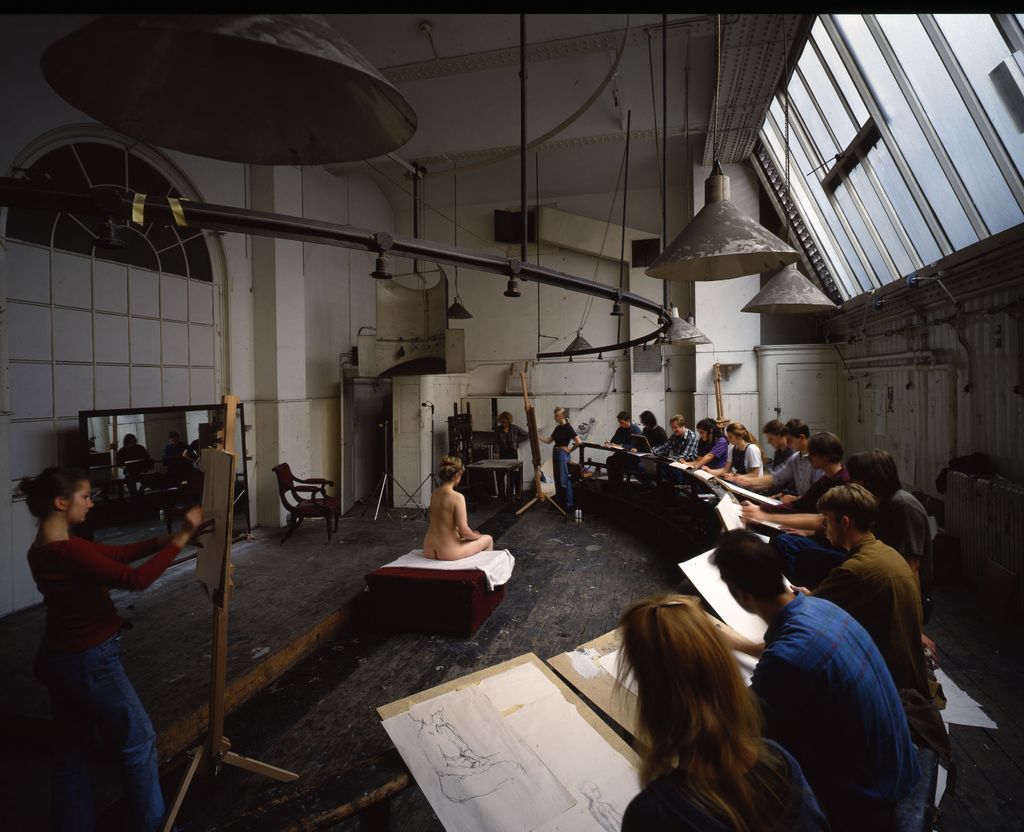 Stem or steam? Some questions for art education

Charles Saumarez Smith, secretary and chief executive of the Royal Academy of Arts, asks whether art education in Britain is going in the right direction
4 min read

Stem or steam? Some questions for art education

Charles Saumarez Smith, secretary and chief executive of the Royal Academy of Arts, asks whether art education in Britain is going in the right direction
4 min read