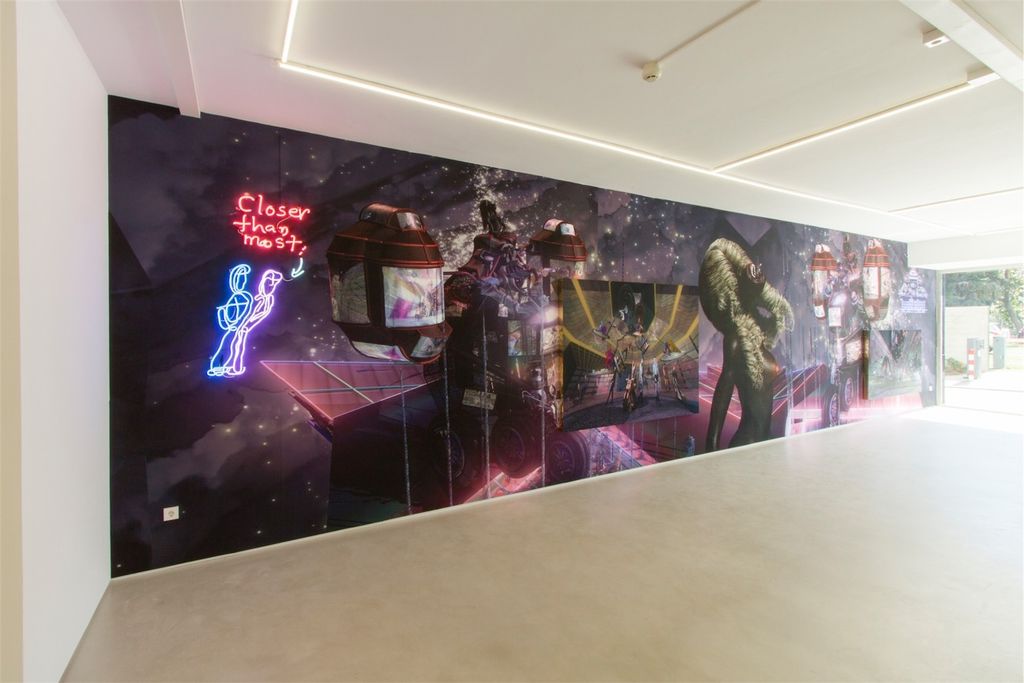 Ended
Show
INAUGURAL SHOW
7 artworks for sale
ART
ABOUT THE ARTISTS
LUIS GISPERT + JACOLBY SATTERWHITE NEW SPACE / INAUGURAL SHOW 25 MARCH 2016 - 15 MAY ​ LUIS GISPERT New works by Luis Gispert offer art as the high-end collector’s design equivalent of a hip-hop artist’s gold chains. There are plenty of different styles to flaunt and parade — Figaro, rope, curb, Byzantine, herringbone, bead and snake — each with intrinsic value inflated by context. All of them signify affiliation with a posse. ​ At Lundgren Gallery, the New Jersey-born, Miami-raised, Brooklyn-based artist shows an array of lengthy gold chains embedded in what appears to be thickly layered slabs of asphalt. (The heavy slabs are actually composed from small rocks painted or resin-coated in glistening black.) The chains are pressed into the blacktop, as if some hapless squirrel or armadillo squashed by a speeding car. ​ But this is not just any roadkill. Gispert’s glittery, golden chain designs recall famous paintings. ​ A dense tangle is an obvious phrasing from a Pollock drip-painting. Thin, draped chains flowing down from the edges toward the bottom center suggest a Morris Louis. A chunky interlace of looping, lozenge-shaped forms traces the suggestive contours of a blue nude cutout by Matisse. Luxury consumer goods gainsay social rebelliousness. Gispert has been mining this contradiction, which is shared by art culture and hip-hop culture, for more than a decade. This is Luis Gispert’s 3rd show with our gallery. ​ JACOLBY SATTERWHITE The video work: Reifying Desire 6 utilizes 30 or so 3D modeled versions of Jacolby's mothers drawings, his body, and animated figures. The intersection of the disparate disciplines including dance performance, drawing, and digital media acts as an exquisite corpes strategy for guiding the storyline. Ordinary utilitarian objects become queered and repurposed in pursuit of defining a new utopian and non political space to perform in. The result is an overlap of visual trajectories between his mother Patricia Satterwhite and himself. Her private domestic documentations/inventions, and Jacolby's public reactions to pop culture, art history, and political histories. It is a distorted simulacrum of reality. The video Reifying Desire 6 has been shown at the Whitney Biennial 2014, and was included this year at Whitechapel Gallery in London in the show: Electric Superhighway. Also 7 new c-prints are presented so as new neon works mounted on Jacolby’s latest unique wallpapers. This is Jacolby Satterwhite's 3rd show with our gallery.